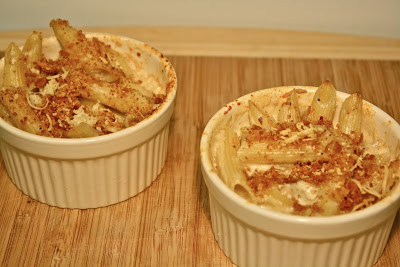 My husband and I have started a new tradition in our dates. Yes, we still go on a date weekly (at least we try REALLY hard to go weekly).
We decided that each week we would switch and each be responsible for planning a date for the other based on what they would want to do and enjoy. It really makes you think about what the other would really like, makes you listen to them really hard throughout the week about what they have mentioned they really want to eat or do, and in general has been really fun for us to be creative with each other. 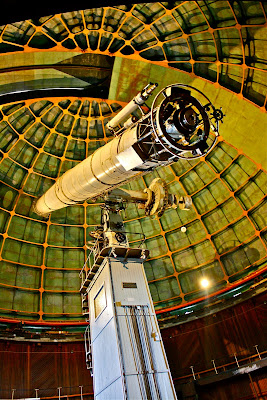 This past week was my turn, and I wanted to take my husband to the Lick Observatory on Mt. Hamilton here in San Jose. He’s said several times he’s wanted to go there, and he’s a loyal fan of the History Channel, where he found out that Albert Einstein has actually studied there in order to create part of the theory of relativity. Pretty amazing. 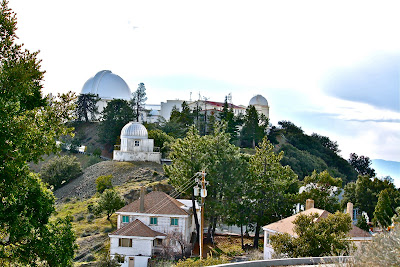 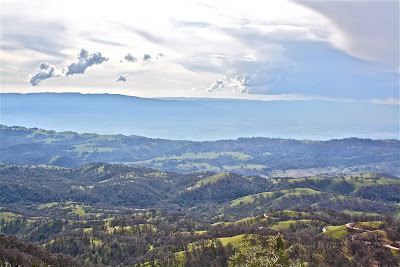 So, we went on Saturday, because it’s only open during the daylight. It takes an hour to drive up the mountain in the most nausea-inducing curves you’ve ever seen! Apparently it was created for horse and carriage so they could deliver materials, and it couldn’t be too steep, so I’m pretty sure we did at least 3 or 4 FULL u-turns, even though we were just following the road. Did I mention I’m scared of heights! 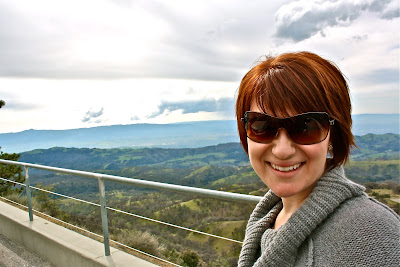 After the fun at the observatory, we came home and I cooked dinner rather than going out. I have been wanting to try this amazing macaroni and cheese recipe listed in the Top Chefs cookbook my friend Patrick gave me for my birthday last year. I’ve been kind of chicken to try it though, mostly because 1) every time I try a form of mac and cheese it ends up really dry and 2) this is one of the signature recipes from one of the guys on Top Chef – not just something he came up with on a whim during the show – he cooks this at his restaurant, etc. Scary stuff.
Like I mentioned, it’s definitely not your mama’s mac and cheese – Truffle and Cognac Cream Macaroni and Cheese – amazing! Seriously, amazing! How can you go wrong, why was I so stinkin scared! 🙂
I changed it up a little, because the recipe actually calls for black truffles, which run up to $1,000/pound – yeah right! I love my husband and all, but date nights are usually pretty inexpensive – like I would buy them EVER! Maybe if someone paid me $2,000 to eat it. HA.
So I used white truffle oil which my hubby bought me for Christmas as a stocking stuffer. Hadn’t used it yet, and was super excited to give it a shot. I added shiitake mushrooms to the dish to make it feel like truffles. I also substituted part romano cheese for the parmesan, because I only had half the amount of each, so I just combined them. Lastly, I also substituted half the amount of cream with fat free half and half. I would love to say that it was for health reasons (it really was! ), but it was because I didn’t have enough cream. Be prepared, this makes ALOT!!!
What do you do for date night? Do you plan it, does your spouse? What’s your favorite date night activity? I’m always looking for new ideas!
White Truffle and Cognac Cream Macaroni and Cheese (Adapted from Chef Dave – Top Chef Season 1)
Ingredients
Unsalted butter for the baking dishes
1 cup cognac
1 Tbs. extra-virgin olive oil
1 small shallot, minced
6 garlic cloves (roasted)
1/2 cup chopped shiitake mushrooms, if desired
1 Tbs. sherry
2 Tbs. white truffle oil (can be purchased at Whole Foods)
+ 1 Tbs. white truffle oil for bottom of baking dishes
2 cups heavy cream
2 cups fat free half and half
1 cup finely grated Parmesan (plus more for sprinkling)
1 cup finely grated Romano cheese (you can do just Parmesan or just Romano if desired)
2 tsp. Tabasco sauce
salt and freshly ground black pepper
1 pound penne – cooked al dente
2 1/2 cups finely grated fontina cheese
2 cups sourdough bread, cubed
DIRECTIONS
1. Place small amount of truffle oil in bottom and sides of 8 medium sized ramekins or 9×13 baking dish
2. Place the cognac in a small saucepan or skillet over medium heat. Bring to a simmer and cook until reduced by half, 10-15 minutes. Remove from heat and set aside. 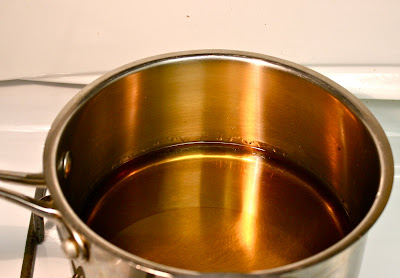 3. Finely grate cheeses and set aside. 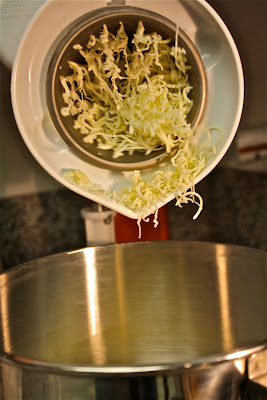 4. In a large saucepan, heat the oil over medium heat. Add the shallot, garlic, and mushrooms and cook until the vegetables are softened but not browned. Add the sherry and stir until evaporated. 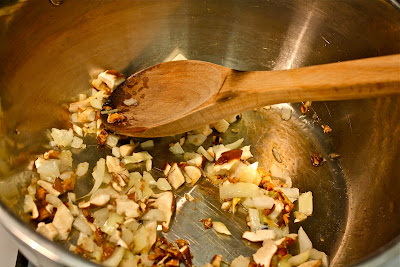 5. Add the cream and reduced cognac. Then add the truffle oil. 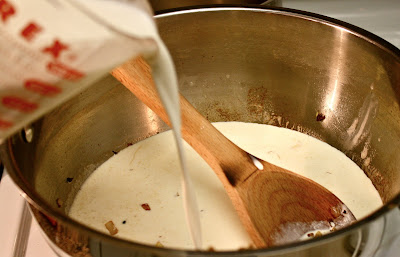 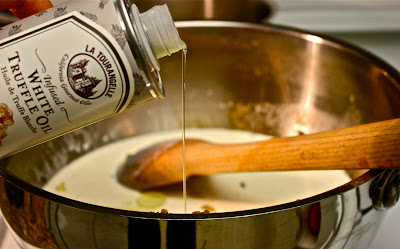 6. Bring to a simmer, reduce the heat to medium-low and cook, stirring occasionally, until the mixture is reduced by half and the truffle flavor is infused, about 20 minutes. Add more truffle oil if desired. Watch the pot carefully, so the cream doesn’t boil over. 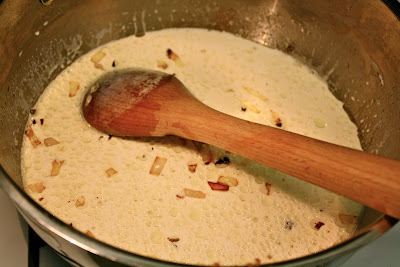 7. While the cream is reducing, cube bread, drizzling enough olive oil over to cover each piece of bread, sprinkle with salt and pepper. 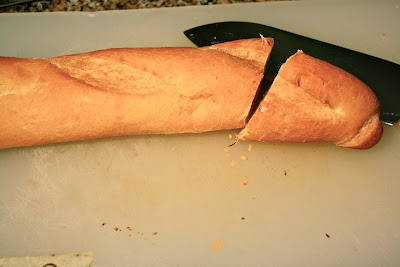 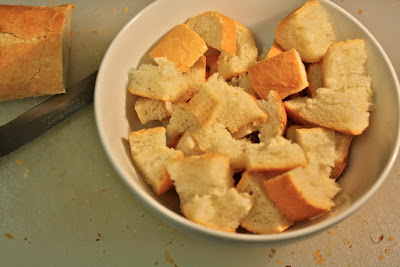 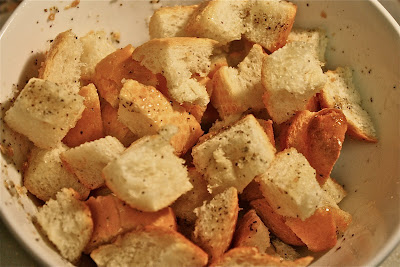 8. Bake in single layer on baking sheet for 15 min. 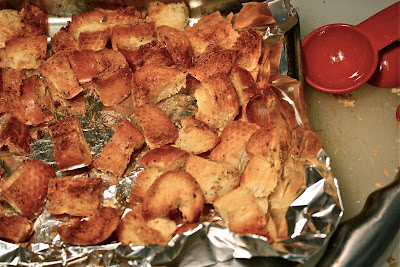 9. Place croutons in food processor or blender and process until broken down into crumbs. 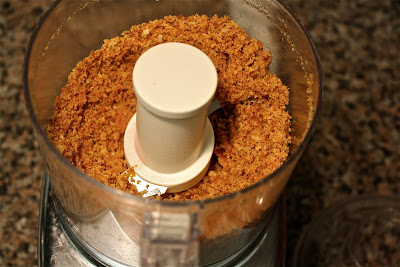 10. Once cream is reduced, add Tabasco, Parmesan and Romano cheese, salt and pepper to taste. Stir to combine until cheese is melted.

12. Add the cooked pasta and fontina cheese and stir until all cheeses are melted. Taste and adjust seasoning if necessary. 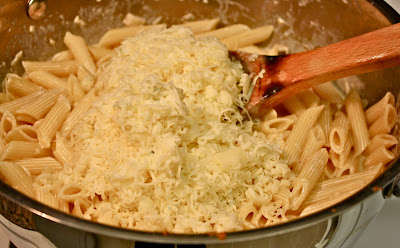 13. Divide the pasta among the baking dishes and top with the crouton crumbs and grated cheese. Bake for about 20 minutes at 350 degrees for ~ 20 minutes, or until bubbly and browned on top. 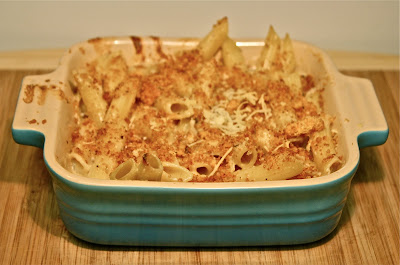