The hubby and I had a P.J. day today. We rented movies, turned off the phones, and stayed in. It was fabulous. We watched Julie and Julia for the first time. What a great movie!! In the middle of the movie, Julie attempts Julia’s Raspberry Bavarian Cream dessert for the food editor. Something about it was calling my name. Or maybe it was the fact that I’m still craving comfort food because the New Year hasn’t hit yet. I happened to have all the ingredients on hand, the hubby encouraged the yumminess, so, here I am, attempting my first ever Julia Child’s recipe. I’m actually surprised this is my first Julia recipe, but I guess there’s a first time for everything. I’ve made a lot of custards/puddings, but never a Bavarian cream to this extent. It wasn’t actually too hard, and I was pretty pleased with the outcome, however I do wish it was a LITTLE bit creamier. Not sure if it was my fault or if I’m just used to chocolate flavored custards which end up being a little creamier. I also adapted the recipe a bit for what I had on hand, the biggest changes being raspberries/blackberries making it mixed berry instead of just raspberries (I didn’t have enough raspberries) and 1/8 cup of egg nog in with the heavy whipping cream secondary to not having enough of the cream. I also halved the recipe since the hubby and I DO NOT need 8-10 servings. Lastly, in the movie, Julie makes it in a mold (if you haven’t seen the movie, there’s a small spoiler alert), but I didn’t want to risk the crazy falling over/out or only half of it coming out of the mold, so I made it in cups as how the adapted recipe did. Hope you enjoy!

-adapted from A Bowl of Mush

* a tray of ice cubes

1. In a bowl add the orange juice and the gelatin powder and mix together and set aside to soften. 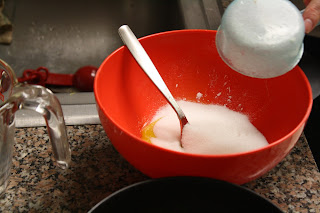 2. In a large bowl beat the egg yolks, cornstarch and sugar together until pale yellow. 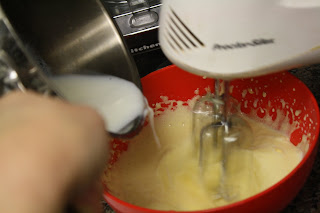 3. Beat the boiling milk into the bowl pouring very slowly.

4. Pour this mixture into a sauce pan over a medium heat, stir constantly with a wooden spoon until the mixture is thick enough to coat the spoon.

5. Immediately remove the saucepan from the heat and add the orange/gelatin mixture and beat all together until dissolved completely. 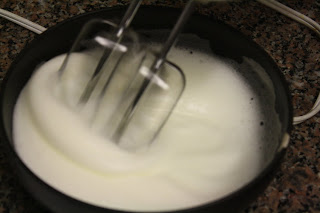 6. In another bowl beat the egg whites, salt and tablespoon of sugar until it forms stiff peaks. 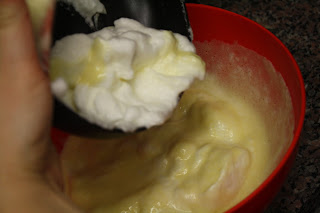 7. Fold the egg whites into the custard cream mixture gently

Rinse out the previous mixing bowl and pour the custard cream in. 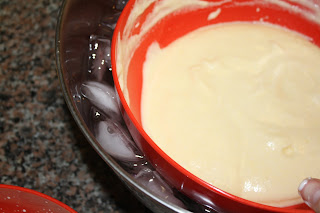 8. Set the bowl over another bowl filled with the ice and water.

Allow this mixture too cool down without setting, mix a few times.

9. In another bowl whip the whipping cream until it doubles in volume. Fold the whipped cream into the cooled custard mixture. 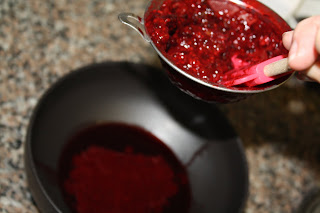 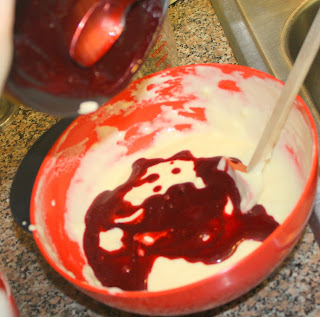 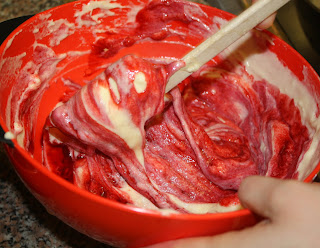 Fold the raspberry puree into the custard cream mixture.

11. Add the cream to individual serving glasses, top the cream with fresh raspberries and place in the refrigerator to set for approximately 3 hours or until they are ready to be served. 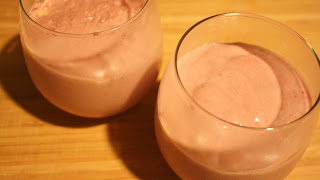 Tags:
Share
Rebekah
Hello, I'm Rebekah! Wife to a creative guy and mom to one incredibly cute little man. I love to read (novels), run (especially races), drink lots of coffee (sweet and creamy please), and enjoy beautiful community with good conversation around a table (with delicious food). This space is all about meshing real life, good food, and beautiful pictures - of food of course.
Related news
You Don’t Know What You’ve Got Till It’s Gone 6 years ago
Swedish Three Layer Bars 7 years ago
The “I Don’t Know” Predicament 8 years ago
0 comments